Risk management is part of due diligence, a duty to prevent or mitigate negative social and environmental effects resulting from business activities, established by the OECD Guidelines for Responsible Business Conduct and the UN Guiding Principles for Business and Human Rights.

Switzerland
November 2020 – The Responsible Business Initiative was topic of referendum and was not adopted. Therefore the counter-proposal (including non-financial reporting requirements, human rights due diligence rules with respect to child labour and conflict minerals) has entered into force.     June 2018 – The National Council (lower house) approved a legislative proposal that requires large companies to conduct human rights due diligence. This bill was a counter-proposal to the citizen Responsible Business Initiative which wanted to change the Constitution to introduce duty of care for companies, including human rights diligence and civil liability.

Austria
May 2020 – Introduction to parliament of Social Responsibility Law in the (online) garment sector – due diligence requirements which aim to prevent the sale of clothing and footwear produced with forced and child labour.

United Kingdom
January 2020 – The Environmental Bill has been reintroduced to Parliament.
March 2020 – A member of parliament proposed an amendment to the Environmental Bill that would require the government to publish a separate draft bill on human rights due diligence.         2015 – Modern Slavery Act has been adopted, including a transparency in supply chains clause, which requires due diligence measures to ensure slavery or human trafficking is not taking place in their supply chains.

Netherlands
March 2021 - A proposed bill, Dutch Bill on Responsible and Sustainable Business Conduct, to expand the child labour due diligence law is modelled on the German and Norwegian supply chain laws. However, the law would only apply to companies with more than 250 employees and would thus apply to only a third of the members of the Dutch Agreement on Sustainable Garments and Textiles (AGT) initiative.
May 2019 - The government passed a Child Labour Due Diligence Act, which will come into force in 2022, requiring companies to submit a declaration to the regulator stating that they have carried out due diligence to identify child labour risks throughout their supply chain.

France
February 2017 - France introduced its supply chain legislation with the Duty of Vigilance Act (Loi de Vigilance). The Duty of Vigilance Act imposes a duty of vigilance on all large French companies - with more than 5,000 employees in France or more than 10,000 worldwide - in relation to the companies they control and all their contractors and suppliers. The law consists of two mechanisms: a "civil duty of vigilance" aimed at preventing risks and serious violations of human rights, health, personal safety and the environment in relation to business activities, and a "redress and liability mechanism" for breaches of these duties by companies.
November 2018 – The government committed to support a legislative proposal establishing an EU-wide duty of vigilance.

Italy
2001 – Legislative Decree on Administrative Liability of Legal Entities was introduced, which gives criminal liability for human rights violations. Compliance programs should be in place in Italian companies.

See the picture below for a larger overview on movements around due diligence legislation: 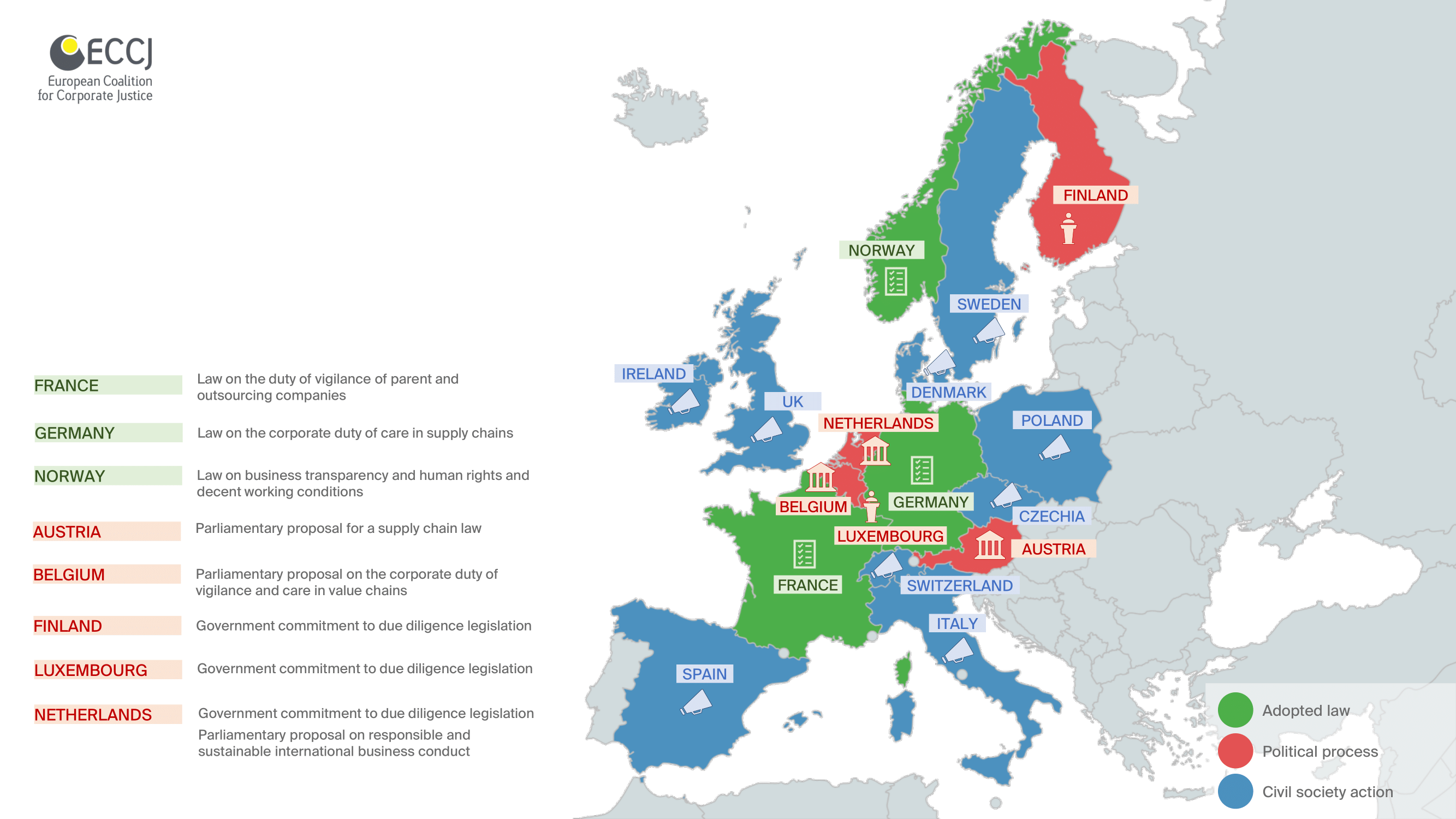